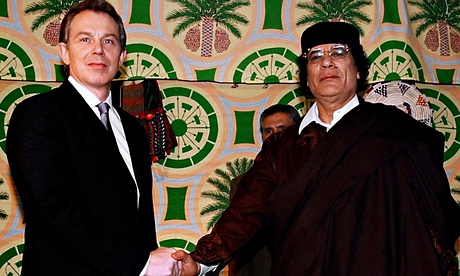 From daily The Guardian in Britain:

Links between MI5 and Gaddafi’s intelligence during Tony Blair’s government more extensive than previously thought, according to documents

Britain’s intelligence agencies engaged in a series of previously unknown joint operations with Colonel Muammar Gaddafi’s government and used the information extracted from rendition victims as evidence during partially secret court proceedings in London, according to an analysis of official documents recovered in Tripoli since the Libyan revolution.

The exhaustive study of the papers from the Libyan government archives shows the links between MI5, MI6 and Gaddafi’s security agencies were far more extensive than previously thought and involved a number of joint operations in which Libyan dissidents were unlawfully detained and allegedly tortured.

At one point, Libyan intelligence agents were invited to operate on British soil…