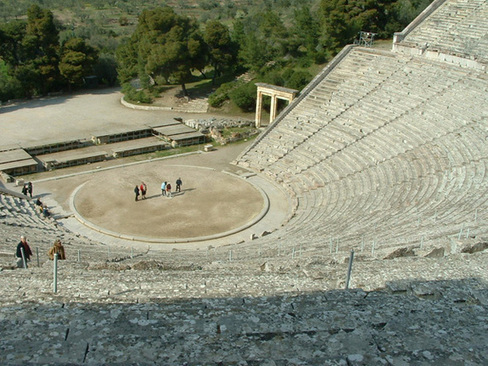 The trick is in the seats, and even the ancient architects didn’t know what they had accomplished.

Now, researchers at the Georgia Institute of Technology have discovered that the limestone material of the seats provide a filtering effect, suppressing low frequencies of voices, thus minimizing background crowd noise. Further, the rows of limestone seats reflect high-frequencies back towards the audience, enhancing the effect.

Researcher Nico Declercq, a mechanical engineer, initially suspected that the slope of the theater had something to do with the effect.

"When I first tackled this problem, I thought that the effect of the splendid acoustics was due to surface waves climbing the theater with almost no damping," Declercq said. "While the voices of the performers were being carried, I didn’t anticipate that the low frequencies of speech were also filtered out to some extent."